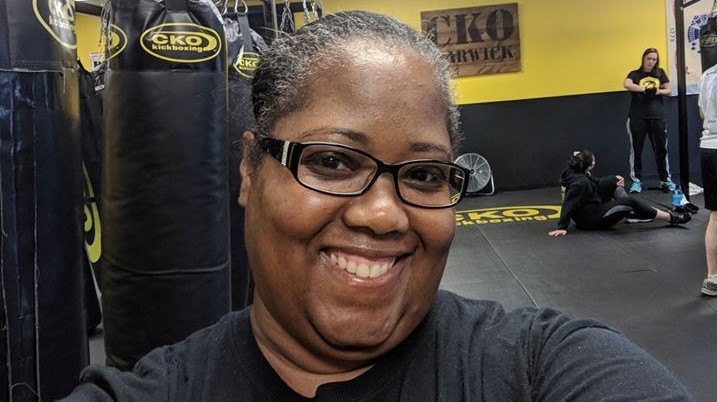 Our CKO Member’s Journey Back to Self-Love

When you’re in a dark place, sometimes it’s hard to imagine a source of light. Natasha Williamson found it, perhaps to some, in an unlikely place.

Williamson was working from home on a Monday morning when I called her for our scheduled phone interview. We briefly discussed the niceties of working remote (Williamson, 50, is a Management Program Analyst for the U.S. Government) and as she went on to express her concern for her fellow government co-workers affected by the government shutdown, her compassion for others was unmistakable.

As I began to ask if hitting the bag at CKO helps get her frustration out, she stopped me there and said that her story actually began long ago.

As a pre-teen, living in Brooklyn, Williamson’s mother sent her to the store one day to get a bottle of Sunkist and a box of maxi pads. What should have been a quick trip there and back home turned into hours of horror.

Williamson was taken from the store by a stranger, who brutally raped her.

“He let me go with a threat that I had to count to 100 and that if I stopped before then, he was going to kill me.”

The man told her which way to walk as she counted, but Williamson, taking note of her surroundings, changed her course for the most direct route home. Eight hours later she walked in her front door to find police officers, a worried family and a sense of relief and disbelief.

Though they caught her attacker years later, this nightmare changed her.

“I became mean. I didn’t want to be bothered by people. I just stayed in the house and I ate.”

When she did leave the house, she was always home before dark, especially in the winter, as that was the time of year the attack took place. The attack and accompanying chronic psychological stress caused endometriosis, ongoing pelvic pain for which she underwent surgery every year and a half for 20 years.

In 1993, Williamson and her high school boyfriend got married and had a son, Lovelle. Surgery after surgery, Williamson’s health not only worsened but her marriage did as well. She suffered through almost three decades of a mentally abusive relationship.

“He was just not a nice person, but I loved him through all his faults. He always conditioned how he was going to love me…he told me if you gain weight I’m going to leave you. He told me that I was disgusting.”

Williamson’s pregnancy was tough and following the birth of Lovelle she couldn’t get the weight off. Additionally, her unhappiness in her abusive marriage took a toll on her and she just ate to cope, leading to a diagnosis of diabetes and high blood pressure.

To anyone from the outside looking in, Williamson needed a change. Perhaps unbeknownst to her at the time, change began with a move from Brooklyn to Warwick, NY, in 2004; this move allowed her to enroll Lovelle in a better school system whilst moving her away from the familiar streets where her attack took place.

Following the move, in 2006 Williamson had a hysterectomy at the recommendation of her new doctor. The next year, on her birthday, her husband left her and her son.

Though he left their home, Williamson’s husband was still present in her life. Until Memorial Day Weekend in 2008.

“I reached a pivotal moment…he was being so nasty to me and, as I was sitting there, I swear God was talking to me, saying ‘Why are you still here? Why are you still putting up with him?’ and I left.”

The following day, Williamson woke up in the middle of the night and heard a voice say, “You know what to do.” She went back to sleep and, when she woke, went straight to a lawyer’s office where she filed separation paperwork.

Her health still at risk, and weighing in close to 300 pounds, Williamson knew that, for the sake of her son, she needed to make another change. So, she’s joined a gym. Then another. Then another. Nothing stuck.

Every gym she went to “was judgmental…people just looked at me and made me feel uncomfortable,” she says.

In 2012, Williamson was working a second job at a supermarket. One of the customers mentioned to her that she was going to the new gym, CKO Kickboxing, which had recently opened a few miles away.

Though hesitant at first, she went. And what she discovered was the next pivotal moment in her life.

“I was huffing and puffing, but when it was over I was still alive. Something just took over me and I loved it. It was everything…the atmosphere, the music, the trainer and her energy. And the people around me were nice and smiling…some of us were the same weight. There was no judgment.”

She left class and when she got in her car and shut the door, she started screaming in excitement.

She came back again and again, and the “wow” moments, as she calls them, continued. She came to know Sabrina, the franchise owner and instructor at CKO Kickboxing in Warwick, very well. CKO, from the workout itself to the people inside, became an integral part of her life. And she felt good.

Her soon-to-be ex-husband noticed a change in her.

“When he started making negative statements about kickboxing, even though he knew I loved it, I knew he felt threatened.”

Classes did not come easy to Williamson, by any means. They were tough, beyond challenging even, but she kept on, because with each class she gained something and it was more than muscle.

“I hadn’t gotten rid of thinking, ‘You’re not good enough.’ But one class had me thinking how I have to change my whole process of living and thinking. I had to learn to love me again.”

And the self-love came. Williamson’s divorce was finalized in 2013. That chapter of her life came to a close.

“With CKO I learned to enjoy my life without him.”

For six years now, Williamson hits the bag at CKO four times a week. She says that she doesn’t schedule anything until after her CKO class.

She was part of CKO Warwick’s first 10 Week Transformation Challenge. She started tracking what she ate and learned about the benefits of clean eating. She has a close-knit group of CKO members who she regularly attends Friday night classes with.

The community and solidarity she found at CKO helps her stand strong. CKO is more than a gym; to her it’s also a place to find “counseling…to learn to trust people, to be able to tell your story…It’s not just CKO…they are my family.”

She keeps her uphill battle of a story in mind whenever a newbie walks through the CKO doors. She greets them, tells them to go at their own pace and to not compare themselves to anyone else.

“I tell everyone where I started and I still get excited when I do something for the first time.”

Though she developed fibromyalgia, which she believes is related to the hysterectomy, it doesn’t stop her. She says her CKO classes help manage it and that “pain is not going to win.”

Those six years of four weekly classes have paid off. Williamson has gone from a size 22 to a size 14. Not only that, she no longer has diabetes or high blood pressure.

“I told Sabrina the news and we cried together.”

Williamson is now healthy; physically, mentally, personally, socially. I could go on. She’s got it all and as she told me, at CKO she “stands with the best of them.”

Williamson spreads her love of CKO to others, including Thomas, her boyfriend of almost three years, who is very supportive of her and her affinity for CKO.

“He took a CKO class and called me to say he woke up three hours later. He said, ‘You do this four times a week?’”

Thomas is joining CKO but jokes with Williamson that he’s not going to take class when she does.

If there’s anything to be learned from Williamson’s story, it’s that there’s always a way back to yourself. It’s not always clear. It doesn’t always happen right away and most often it’s anything but easy.

It can be an uphill battle, but if you keep fighting, scratching, clawing your way out of the dark there is a light to be found…and that light is usually within you. Perhaps it was dim for a while, but it can be lit to its full magnitude again because when you’ve lost yourself, you’re always there waiting to be found.