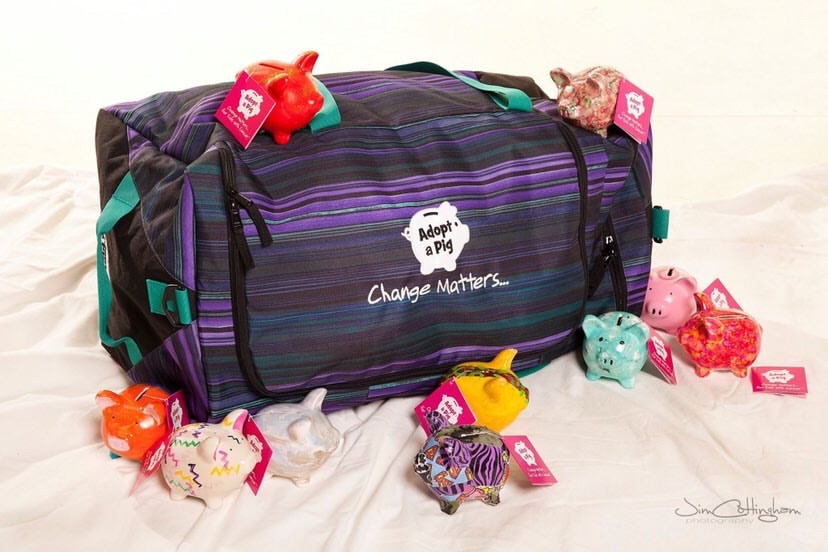 We all hope for good things in life, desiring smooth sailing for ourselves and those we love. Though, for some of us, there may come a time when we are given devastating life-changing news. And when that happens, it’s hard to know where to begin, how to face a new reality.

In 2008, Elyse Frank was in a car accident that left her with four damaged nerves. An athlete her entire life, she was delivered quite a blow when doctors warned her against exercising, as there was a chance of reactivating a nerve in a wrong way, which could leave her paralyzed.

“At that point, you kind of freeze your life,” she says.

This news came as Frank had been trying to pull herself out of a hole. As a young girl, her father overdosed on depression medication. Her mother was left to raise five children on her own, including Frank’s sister, who suffers from cerebral palsy and was in and out of hospitals throughout their youth. It was a tough childhood, in a household where they lived paycheck to paycheck and where Frank’s unique wants and hopes for her future were unsupported.

“I come from a family that doesn’t say ‘I love you’…that doesn’t support you. I remember when I went to take the test to get my drivers license, my mom said I wouldn’t pass.”

Even with many chips stacked against her, Frank made the decision that her life would be different. It would not mirror how she was raised. She could flourish on her own. She would strive to get where she wanted to be. And so in her early twenties, as she had just begun interior design school at The Art Institute of Philadelphia, the car accident happened.

She spent countless hours in therapy, visiting various nerve specialists who suggested a slew of prescription medications which she didn’t want to take, due to the way in which she lost her father as a child. This went on for years, all while she still struggled through her difficult family relationships and an unfulfilling corporate job post college. Eventually, it all took its final toll on her.

“Right before Thanksgiving in 2016, my body had just had enough of everything going on around me…I don’t remember anything, but waking up on the bathroom floor.”

She immediately went to her family doctor and revealed all that she was facing and grappling with, everything that led to this long bout of depression. She was prescribed two antidepressants, but the scripts sat on the table, untouched. That wasn’t how she wanted to rise up.

As a lifelong athlete, working out was how Frank coped. Yet, there she was being told again and again that exercising wasn’t an option. Even so, she made a hard decision.

“I thought forget it. I’m done. I’m done with doctors telling me not to work out. I just want to live my life. So I went back to the gym…I did the exercises they showed me in therapy and I built up from there, working a little harder on days I felt good. I knew my limits so if something didn’t feel right, I knew to stop and take breaks.”

She initially joined a few big gyms, but was unsatisfied. Then, she found CKO.

“I was blown away. There is just something about this workout…And I feel like I’ve rebuilt the muscles around my nerves.”

Frank joined CKO in January 2017 and by March reached out about opening her own CKO. Less than a year later, she left her corporate job behind her and opened CKO King of Prussia in January 2018.

One positive take away from her corporate job was her introduction to a non-profit organization, Adopt A Pig, and a little girl it serves.

“A family came in with their five year old daughter, who was diagnosed with cancer at 18 months old…There was a chance that she couldn’t have the life that so many of us get to live,” Frank says.

Enter Adopt A Pig, a non-profit organization with the mission to provide coping mechanisms for children and families affected by cancer. The organization came to be, all because of a piggy bank.

In 2005, a little girl and her father sat down to paint a piggy bank after learning of her cancer diagnosis. This form of art therapy, initially a distraction, began an ongoing effort to provide care and comfort for hundreds of families affected by cancer.

That well-known adorable piece of pottery, so often designed to hold the coins you discover on the sidewalk, in this case, holds so much more. After being painted by a child, each piggy bank is adopted by a sponsor, who leads the effort to fill it with donations. The sponsor keeps the piggy bank as a reminder of the family he/she has helped, while donations are sent to Adopt A Pig. There, the funds are used to create coping kits, which help children and families like the one that Frank met that day.

“What happens so often is that families go to the hospital and four hours later find out their child has cancer. These coping kits are provided to them. In them are blankets, snacks, gift cards, an ipad, coloring books for siblings.”

Frank can’t name every item, as they are countless, including cafeteria gift cards, socks, pillows, decks of cards and gas gift cards to cover the expenses of traveling back and forth to the hospital. The cost of each coping kit is $1500 and is delivered to children and families at Nemours Alfred I. duPont Hospital for Children in Wilmington, DE.

“That little girl I met had been in remission for two years…and that family was so grateful that she could fight through it…It was one of those things that hits you in a certain way. And I’ve always wanted to do something else with that organization since then,” Frank recalls.

On September 28th, Frank will get to. She is hosting a Bags for Bags punchathon at CKO King of Prussia where all proceeds will go to Adopt A Pig to create coping bags for children and families who have just been delivered the life-altering realization that cancer brings.

“We are here to work, to help members reach their goals, to work as a team…but we’re also here to to bring people together…to support the community. We are here to give back,” Frank says.

The punchathon will bring great attention to Adopt A Pig as two 6ABC Anchors, Gina Gannon and Bob Brooks will be joining in the fun, each grabbing a bag and striking away with the best of them. They will stand next to members who arrive at CKO with their own struggles, their own stories. It turns out, every member has one.

“You’ll find that everybody has something….an injury, depression, something going on in their life,” says Frank.

This is where she relates. Frank has experienced a tough childhood, difficult family relationships, depression and physical health issues. But she pushed through. She made a change.

“When I reached out to CKO last March, I decided this is where my life is going…You really never know where life will take you.”